The Soviet Union offered Yak-23 to Albania, Bulgaria, Czechoslovakia, Poland and Romania. After 1950, Romania remained the only country that was still flying Yak-23 military jets. It was retired from service by the Air Force of the Socialist Republic of Romania in 1960. Romania owned 62 Yak-23 planes. Of these 2 were converted into a twin-seater. These two were known as Yak-23DC (twin-seater). No Yak-23DC survived to this day. Only one single-seater Yak-23 survived and it’s exhibited at the Bucharest Aviation Museum.

After purchasing the scale model of the Yak-23 plane in 1:48 scale, produced by Bilek, I decided to buy the model of the twin-seater variant in 1:48 scale, produced by A&A Models. It is the only manufacturer on the market that has in its portfolio the Yak-23DC scale model, a variant of Yak-23 single-seater modified into a twin-seater by the Romanian Aeronautical Industry. There were some other variants of the Yak-23 twin-seater, but they all had a differently shaped canopy than the Romanian version. On opening the box you will find a number of seven frames with plastic parts, photo-etched parts, masks for painting the canopy and tires for the rear landing gear. The Yak-52DC model is cast in a gray plastic with recessed panel lines. Except for the fact that it has a second seat, the Yak-52DC is identical with the one produced by Bilek. It also has the parts needed to build the plane engine. With a total of 38 parts, the power plant is well detailed, rendering quite faithfully the Klimov RD-500 engine, which equipped the Yak-23DC aircraft. It can be mounted inside the fuselage, but it will no longer be visible after assembly of the fuselage. On the other hand, you may choose to assemble and display it on a frame near the plane. You will have to manufacture the frame yourself, as it is not provided by the manufacturer. The cockpit can be detailed pretty well with the help of the plastic and photo-etched parts offered by the manufacturer. The photo-etched parts render the belts for the two seats, cockpit components such as pedals and various on-board instruments. However, no photo-etched parts are offered for the dashboard. For this we have a decal to use in combination with the plastic dashboard. The canopy is cast in one piece. Another interesting aspect is the landing gear for which rubber tires are offered, separate from the rims. The front wheel is made of plastic, including the tire. I also think that it is recommended to place some lead weights to the front of the model. I will definitely add a few pieces, just to be on the safe side. Kit details: kit code – 4802; scale – 1:48; manufacturer – A&A Models; total number of parts – 146; resin parts – 0; photo-etched parts – 26; transparent parts – 3; paint mask – yes; length: ~ 17 cm; wingspan: ~ 18 cm.

The decal sheet offers a single marking option of a 1956 Yak-23DC that flew with the Air Forces of the Socialist Republic of Romania. The only problem that I found with this kit are the decals which are incorrect, meaning that the Romanian national markings have a red outline instead of a blue one. This is the reason why I will use decals from a different manufacturer. The assembly and painting instructions are clear and rendered over eight black and white and color pages. The only color page is the one that shows the painting and the marking option.

The Yak-23DC model is an interesting and rare subject and also a scale model that should not be missing from the collection of any model maker who is passionate about the early years of jet aviation. The Yak-52DC  reminds us of the Romanian military aviation history, as well as of the Romanian aeronautical industry. As for the build of the Yak-52DC model I don’t think there will be any problems during the assembly stage, but most likely it will take a lot of patience and attention in order to avoid possible problems. 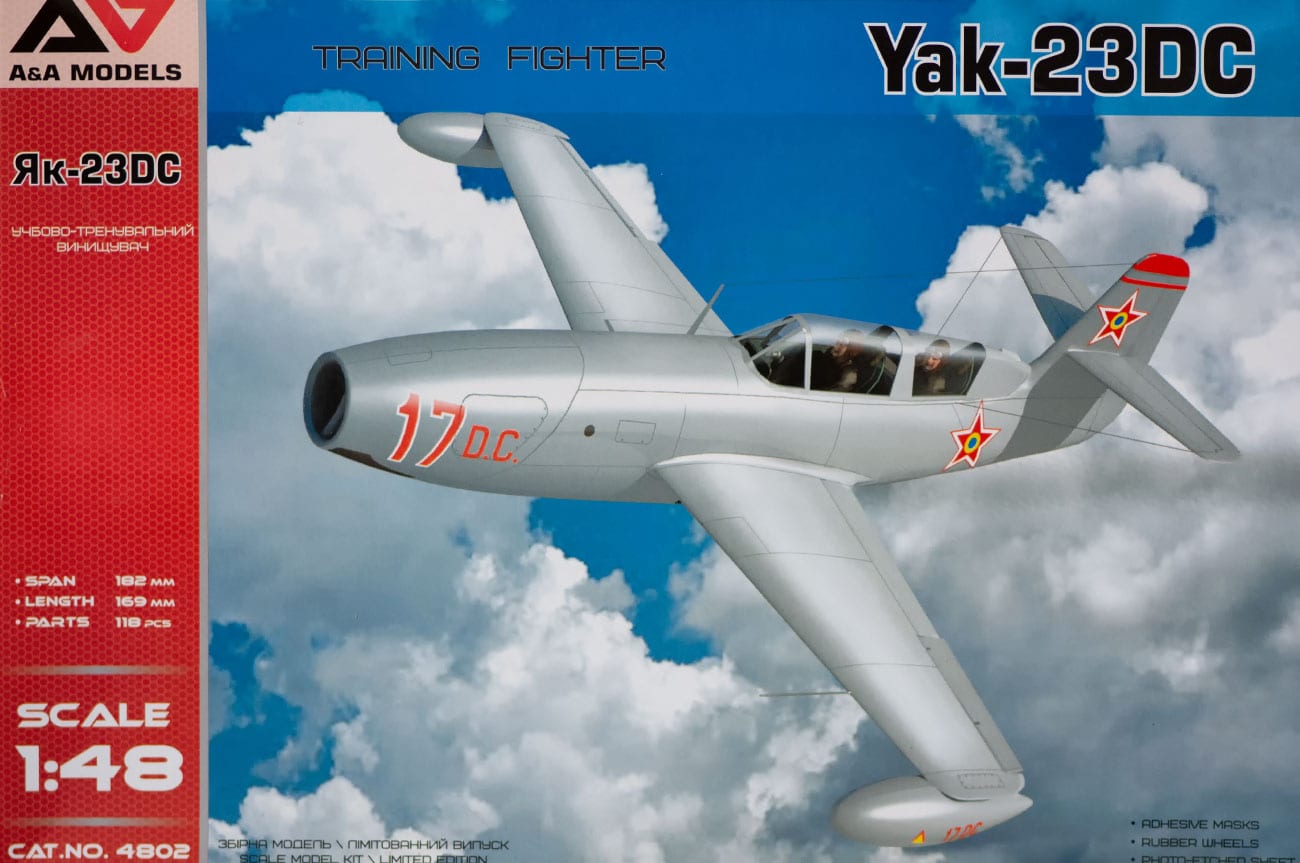