The C-45F Expeditor was the military version of the Beechcraft Model 18 passenger aircraft. Like any plane manufacturer from the 30’s, the designers of this aircraft kept a close eye on the military needs because that was where the money and large orders came from. The occasion popped up in 1941 when the US Air Force and US Navy expressed interest in buying a twin-engine plane for staff transport. And that is how the C-45 Expeditor appeared. With a crew of two (pilot and copilot) and six passenger seats, the plane was propelled by two Pratt & Whitney R-985-AN-1 “Wasp Junior” engines of 450 horsepower each. Its top speed was 362 km/h and it could fly at a maximum altitude of 7900 meters. The C-45 was used by numerous countries around the world for several decades. In addition to US and England, the plane was also in the service of 42 worldwide countries, including Japan, Iran, Honduras, Turkey, Thailand, Sweden, Portugal, etc. Today C-45F Expeditor planes are being exhibited in aviation museums in 16 countries, such as Spain, Malta, Italy and others.

Revell produced and released this model in 1:48 scale. It is the same mold used by ICM for the same plane. It’s easy to figure this out due to ICM logo visible on the model frame. I do not know if the mold is a joint venture of the two companies, Revell and ICM, or if Revell has purchased the ICM molds. In fact it doesn’t even matter as long as this scale model is well detailed, with engraved panel lines. The Revell box contains a total of 7 frames with plastic parts. One of the frames contains the transparent parts – windscreen and the passengers windows.
The total number of parts is 125, of which 11 are transparent. The model does not contain resin parts or photo-etched parts.

The assembly, painting and registration instructions are presented in a full color, 16 pages A4 brochure. They are clear, detailed, and it’s almost impossible for the model maker to make any mistakes from this point of view.

Revell offers decals for two different plane:
1. UC-45 Expeditor from the 2nd Electronics Squadron, USAF, Olmsted Field, PA, 1948;
2. Expediter C.II, No. 728 Naval Air Squadron, Fleet Air Arm, Hal Far, Malta, 1949.
Decals are printed on high quality paper so I don’t think that there are going to be any problems when applying them on the model. 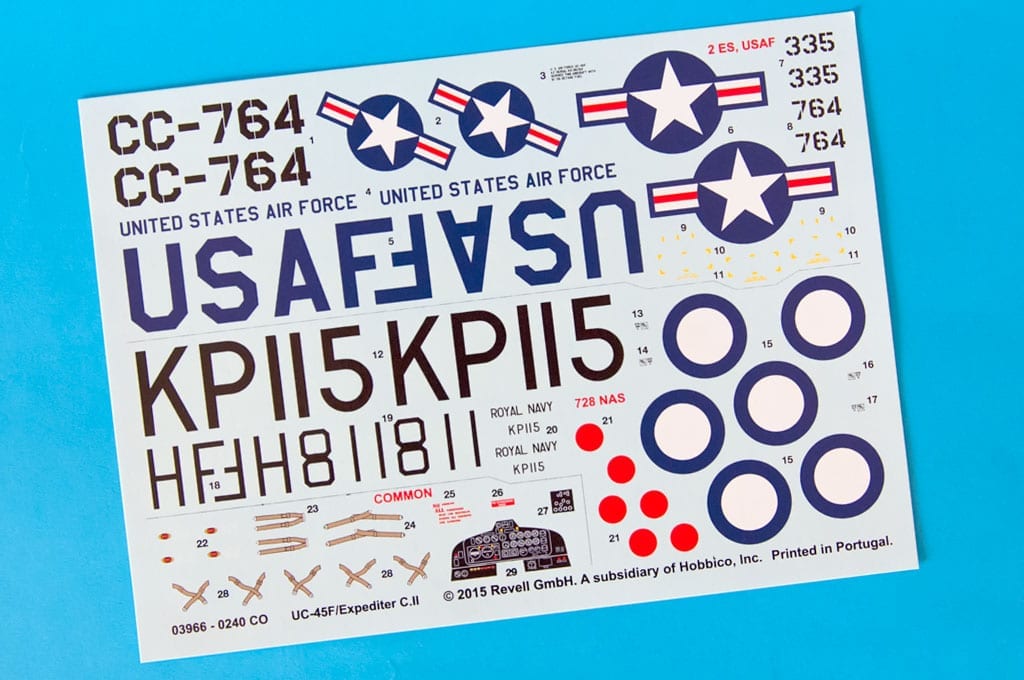 The colors that Revell recommends for painting the USAF variant are the following: Revell 99 – Aluminum, Revell 15 – Yellow Mat, Revell 46 –NATO Olive Green, Revell 08 – Black Mat. These are the colors that are going to be used for the exterior of the plane. For the interior parts and landing gear bay, you will have to use Revell 65 – Bronze Green Mat.

For the Royal Air Force C-45F Expeditor the colors are the following: Revell 99 – Aluminum, Revell 15 – Yellow Mat, Revell 08 – Black Mat. For the interior parts and landing gear bay the recommendation is Revell 65 – Bronze Green Mat. For the plane engines the instruction sheet indicates Revell 99 – Aluminium and Revell 378 – Dark Grey Silk Mat. Personally, I do not think that these are the right colors for the engines but in the end it’s the modelers choice how to paint the model. The recommendations for the minor interior details are Revell 364 – leaf green silk matt and Revell 82 – Dark Earth Mat.

At a first glance it does not look like a model that could pose great problems. It is well detailed and leaves room for improvement for those who want it. Even if it is built “straight from the box” I am convinced it will result in a very good looking C-45F Expeditor in the 1:48 scale.