Nieuport 23 – The Story of a Photograph from Wolrd War I

Photographs tell stories, the stories of the people that took them, of the ones that look at us from long forgotten times and long forgotten places. Today I want to tell you the story of a photograph, or better said the image that appeared on a piece of photographic paper as a result of a chemical processing: the image of an aircraft belonging to the Imperial Russian Air Service in 1917.

It all started a few years back, when I acquired 16 photographs dating from WWI and rendering the images of some pilots and airplanes of the Austro-Hungarian Empire. Among the numerous black crosses painted on the planes, that clearly indicate their origin, I spotted a Russian roundel and a very hard to misinterpret symbol: Adam’s Head – the skull and intersecting bones that symbolize immortality. The aircraft, a Nieuport 23. On the reverse side of the photograph there was the name Kozakov in handwriting. At first the name didn’t give me any clues. After a while I started to read more about the Russian aviation at the time of WWI. And, what a surprise! Kozakov was not just anyone; he was the no.1 ace of the Czarist aviation. He had also been on the Romanian front. So I continued my research about Major Aleksandr Kozakov. I found out that he flew planes like Morane-Saulnier, Spad – SA2, Nieuport 11 and 17 and had 20 confirmed aerial victories. But he never flew the Nieuport 23. So the plane in the picture wasn’t his. Had the person that had written down his name made a mistake?! Very likely… becuase aftel a short while I identified the plane had been flown by Boris Guber, a pilot from the same military unit as Kozakov, hence the name on the photograph. In fact, Major Kozakov was the commanding officer of that same unit.

To shed more light on the situation I have to clarify the fact that, starting with 1916, the Imperial Russian Air Service was organized in Battle Aviation Groups (the equivalent of modern Air Flotilla). Each Battle Aviation Group consisted of more Corps Aerial Detachments (the equivalent of modern Squadrons). Lieutenant Boris Guber was a pilot in the Battle Aviation Group no.1, which consisted of Corps Aerial Detachments no. 2, 4 and 19. Guber flew in the 19th Detachment, while Kozakov in the 4th Detachment. It results very clearly that they were both in the same unit, but the plane didn’t belong to Kozakov. The airplne in the photograph, marked with the serial number N3598, was captured by the Austro-Hungarian army in November 1917. It had become a plane in Guber’s Detachment on August 16th, 1917. When it was captured, the plane had already registered 27 hours and 45 minutes in aerial combat, as it is stated in Victor Kulikov’s book Russian Aces in Wolrd War I.

Then I remembered what the man I had the photographs from said to me – his great-grandfather had given them to him and he had origins in Transilvania (a part of the Austro-Hungarian Empire, at the time) and had fought in the Austro-Hungarian army. The place where the airplane had been captured and the photo taken remains a mystery – possibly on the Russian front, or on the Romanian front, where the Czarist army was slowly disintegrating under the influence of the Russian Revolution, in November 1917. Probably the owner of the photographs had been enroled in the Austro-Hungarian aviation or in the Military Photographic Service. This could be an explanation for the consitent pack of photographs, each carefully dated on reverse 1918 – the year that ended not only the madness of the Great War, but also empires and each surviver began his/ her own journey… some back to Austria, some to Hungary, Romania, Serbia…

To conclude this story I cannot refrain from wondering: who is right? The historians or the one who firmly wrote the name Kozakov twice on the photo and its reverse? And who could be the character watching us from behind the plane’s tail, dressed in Austro-Hungarian uniform? Could he be original owner of the photograph and who sent his memories of these events over the years?! 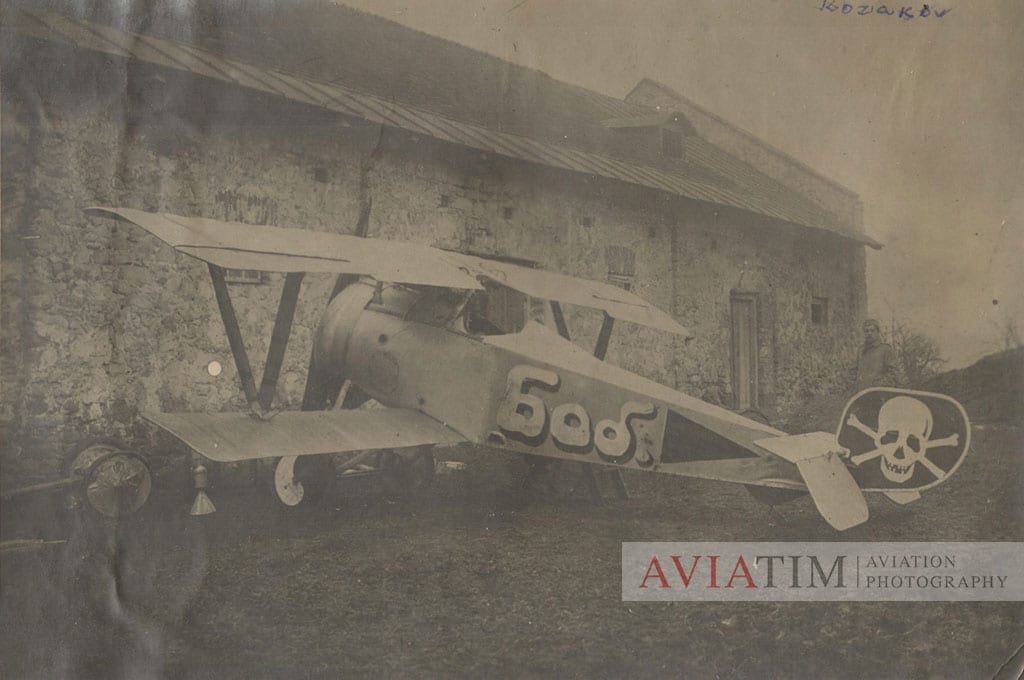