Yak-11, 1:48 scale model, was released on the market by Bilek . A perfect timing, given that for some time I have been trying to reproduce, in 1:48 scale, all the planes that had flown under Romanian colors since 1947 onward. The model is delivered in a cardboard box made up of two parts. It’s not the happiest, nor the most ideal solution in terms of protecting the parts inside. The plastic parts of the future Yak-11 model are distributed on 6 plastic sprues. One sprue contains 3 transparent parts representing the windscreen, the cupola and the landing light that will be positioned in the left wing of the plane. There is a total of 74 pieces, out of which 3 are transparent. The assembled Yak-11 model has a total length of 17 cm and a wingspan of 20 cm. The pieces are cast from a soft plastic that is easy to work with. At first glance it looks like a nice model, but I will assess if it is or not, only after I start assembling the kit.

Instruction sheet that comes with the Yak-11 1:48 scale model is printed in color as a 12 pages A5 brochure. The assembling process is clear enough even for the less experimented modelers. There is also a separate instruction sheet detailing the assembly and positioning of the photo-etched parts.

Bilek offers decals for ten different Yak-11 markings. All markings were used from 1950 to 1960 by Czechoslovakia,USSR, Poland, Austria, the German Democratic Republic, Bulgaria, Hungary, Egypt, the People’s Republic of China and Algeria. All Yak-11 variants are military.

It seems to be a relatively easy build straight from the box that should result in an honest representation of a Yak-11 Moose training plane. 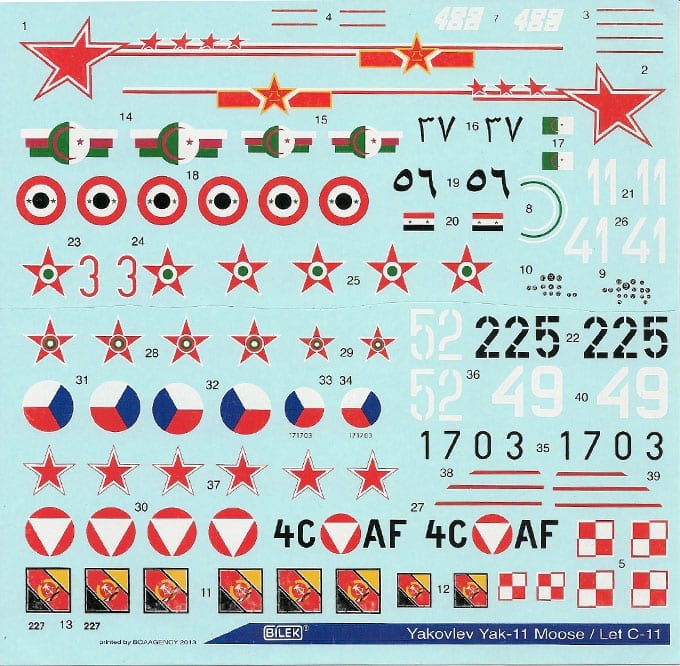